Here we are, with the final qualifier before Paris-Brest-Paris, the 600 km brevet. In many ways I have been anticipating this one more than PBP itself. It is one thing to ride 1200 km with thousands of participants, volunteers, and spectators along the way, never too far from facilities for food, sleep and technical assistance. It is something else to tackle 600 km fully self-supported through somewhat remote areas, with nobody around to cheer or help. I've been thinking that as long as I can get this one done and dusted, I should really be mentally prepared for PBP. Which is kind of the point with this qualifying brevet series anyway.

A video is available here:
https://youtu.be/6Kor31q2MMs

I started off alone from the Ila park in Trondheim at 6 in the morning. I wanted to keep a good progress for the first 120 km, because at that point there is a ferry crossing once every hour, and I wanted to make sure I got on the 11:00 ferry. That worked out nicely, and for the rest of the route I could relax a bit, as there would be no other deadlines of any sort, except of course for the 40 hour brevet limit. As I got off the ferry, the sun had broken through, and the rest of the day was spectacular.

There is a particularly remote stretch from Bjugn (140 km) to Malm (254 km). I had expected the scenery to be a little boring, but it turned out to be the most scenic section of the entire route. After the ice cream stop at Malm, it had become late afternoon, and I would spend the evening riding to Namsos (317 km) for the last possible food stop before some night riding to Høylandet, the furthest point from home at 368 km, and then on to Grong at 392 km, where I pulled out my sleeping bag under some cover at a school. Just as I did that, the first raindrops of the day appeared. The time was now 2:00. I had no trouble falling asleep, and I woke up 2,5 hours later, sufficiently refreshed to pack up my things and get going again.

The weather was quite wet and grim this morning. Of course I also didn't feel particularly fresh, and it took a while to complete the climb over to Snåsa at 430 km. The rain was really pouring down. Another long stretch followed along Lake Snåsa until Steinkjer at 490 km. Toward the end of this section was the sole episode of sleepiness. But all I had to do was to get off the bike, stretch my legs, pocket the sunglasses, and I was feeling fresh again!

Steinkjer marked a turning point for several reasons. First, the Sunday had properly begun. Second, this was the first chance to buy food since Namsos. Third, the weather had turned nice and warm again. Fourth, my legs were properly warmed up and didn't feel overwhelmingly tired from the day before. I sat in the sunshine outside a petrol station with a nice, fresh egg baguette while rain water was dripping from me and my luggage bags.

The ride along Lake Leksdal, Stiklestad, and Verdal was nice and relaxed. At Levanger I stumbled into a bike race called "Around the Trondheim Fjord". The race isn't really around the entire fjord. That would take at least 370 km and the race is only 200. If only the support people I passed had known that the only person to literally ride around the entire fjord was this guy on a recumbent and no race number :-)

In order to keep away from traffic, the route goes on to Markabygda (555 km), through the Skjelstad forest, and on to Hegra (590 km). This is a steep gravel section, and not really the smooth kind of gravel either. Not quite what the Vendetta was designed for. On top of that, it had started raining again. Anyway, we managed fine.

From Hegra I just had the familiar home stretch left. It was raining quite badly, but I didn't mind, because I now knew I would be able to finish successfully.

In the end, the ride had taken me 37 hours and 35 minutes. That's not a fast time by any means, but it was within the 40 hour limit, and that's all that matters. I had prepared a plan to do it in 35 hours. Actually, the riding and the planned stops corresponded quite well with that plan. My issue was that I had more than two hours of unplanned stops. My mindset on this trip was to stop when I felt like it, and not really try to set the fastest time possible. On long rides like this, even short breaks really accumulate quickly.

Having said that, I noticed that it was really hard to keep speed and heart rate up when I tried to. On shorter rides, I have no trouble keeping the heart rate at 150, or higher during races, and I would find it hard to drop below 130. On this ride, I found my heart rate was often 110-120, and it required a conscious effort to go higher. Invariably, I would soon drop down to the relaxed pace again.

I don't know how much faster I could have gone if I really tried. What I do know is that when my wife and kids met me at the finish and took my 7 kg luggage in the car, the bike suddenly felt so agile that I went ahead and posted a PR on the climb back home :-)

With a full brevet series completed, I am now officially a "super randonneur", and I cannot wait to go to Paris to meet up with 6000 more of that kind! 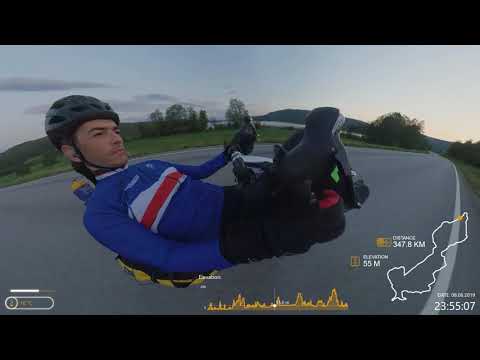